**Again, I'm using oats which are not gluten-free, so for alternative grains to use, please refer to blog on October 19. 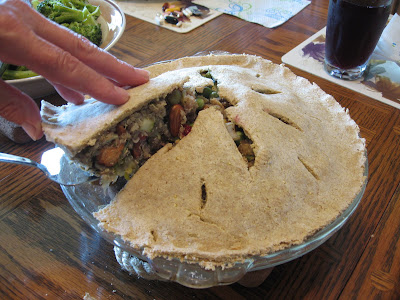 Step 1: In the BlendTec, whizz the millet, oats and flaxseed to a flour, and pour into a mixing bowl.
Step 2: Add remaining ingredients and mix to a dough.
Step 3: Roll dough out between tapioca-flour dusted wax paper or heavy seran wrap. (Some people have found that rolling out gluten-free dough is easier if it has been chilled.)
Step 4: Peel off one side of the wax paper and flip over a pizza pan or pie dish. Peel off the other wax paper.
Step 5: Flatten on pizza pan or press into pie dish. Do not pre-bake, or this dough will become tough.
Step 6: Top the pizza dough or fill the pie crust. Bake for 40 minutes (pizza) or 50+ minutes (pie) at 350 degrees.

This particular dough has really great flavor but it can be a bit tough. The toughness depends on too much needing, too much water and/or too much flaxmeal. You will notice that the pie crust is not flaky but it does hold its shape, and it turned out really good for a Moroccan-like quinoa pie stuffed with vegies, almonds, middle-eastern spices like coriander and cardamom, and with a hint of tartness with the red currants (as people with candida wouldn't dare touch pomegranates as they're as glycemic as raisins!) 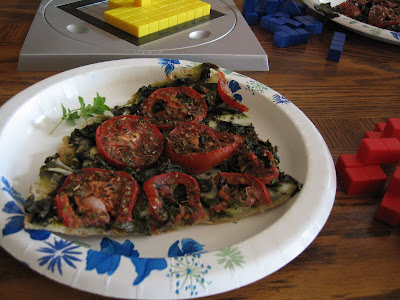 Comparing this pizza crust with the previous pizza crust I made with zucchini, this crust is better for thin-crust pizza, as it holds it shape much better. I experimented with this dough in making chapattis. Ugh! The chapattis turned out as stiff and brittle as I-don't-know-what. I think with some tweaking though, this recipe could be as versatile as the other pizza crust recipe, especially as its better at holding its shape, which is amazing for a gluten-free dough!
Posted by Cheryl Magnant at 2:47 PM