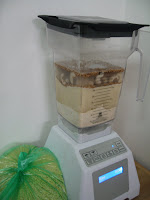 Of course when making food for people with candida, gluten and all sugar must be stricken from the menu. But for the strict candida diet, eliminating eggs, all dairy, yeast, baking soda and baking powder, vanilla with alcohol and/or corn syrup is also important. Even tiny amounts feed millions, if not billion, of bad bacteria; they love those tasty "goodies", so steady strictness will eventually starve those little buggers.

Tonight I was hungry for waffles, which I have had probably two times in the past year because they are made with processed flours. Well, mine weren't. Tonight I rationalized again that if I ground my own grains, maybe they wouldn't be like the typical processed flours that sit around in storage and get moldy or go rancid from the quick aging of their oils. So I started pouring stuff in the blender, and came up with this recipe. However, be informed that these measurements are only approximates. 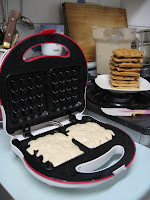 By the way, I use a high-speed blender, a BlendTec. I used to have its competitor, VitaMix (a 5200 VitaMix), but the BlendTec only needs one canister to make smoothies, soups, dips, sauces AS WELL AS grind grains! An amazing little machine and much lighter and easier to wash than my VitaMix, and so I bought one on the spot! [This is not an advertisement although I wouldn't mind working for BlendTec, traveling around and giving demonstrations!!!]

Step 1: In the BlendTec, whizz the brown rice, millet and flaxseed to a flour.
Step 2: Add the remaining ingredients, and whizz to a somewhat thick batter.
Step 3: Lightly oil the waffle griddles with a paper towel dipped in coconut oil, and then pour the batter into the waffle maker. The waffles will be a bit heavier than traditional waffles made with glutinous grains and leavening; they will also take a bit longer to cook. However, they come out tanned golden and taste marvelous!
Posted by Cheryl Magnant at 7:59 PM