In the previous blog, I commented on oats as being glutinous (unless using the specialty non-glutinous oats) and offered alternatives when adjusting recipes. The following crust recipes were made before I became intollerant to oats, which became apparent only last month. For the record, in September after returning to Korea, whenever I made a bowl of oatmeal slow-cooked overnight in my crock pot, I would experience tons of ear pressure which would last for several hours. I'm a teacher and need to listen to my students, and it was really embarrassing to ask students to repeat themselves. In class I was constantly equalizing the pressure in my ears, but instantly there would be pressure mounting again. It was a very distancing feeling and interfered with interaction. I quit using the oats, a very rough-cut, fibrous oat sold at the local health food store. I didn't have problems before with them, and maybe it was the batch, but because I'm going for the candida cure and I know that oats are a no-no glutinous grain, I nixxed them from my diet.

Anyway, the following recipe is one that I developed when at home this summer before I was reacting to oats ... so the oat-ingredient needs tweaking, but since I haven't experimented with other grains and measurements yet, I'll just post the recipes I formerly used. By the way, many people have commented on the flavor and texture of this recipe :)

Step 1: In the BlendTec, whizz the quinoa and oats to a flour.
Step 2: In the food process, whizz about 1/2 a zucchini to a liquid. Should make about 2 or so cups.
Step 3: In a mixing bowl mix the flours and zucchini liquid, and add remaining ingredients.
Step 4: Form the dough into a ball (adding more flour or water/oil as needed) and with oiled hands spread out the dough onto a greased pizza pan.
Step 5: Top the dough with pizza toppings. Pictured here the toppings were a home-made pesto-sauce (tomatoes are very acidic, and store-bought tomato sauces have citric acid!), thinly sliced zucchini, onion slices, a heap of spinach leaves over an inch thick and topped with more onion slices and tomatoe slices (I added tomatoes to my diet this summer - oh yum!). Very lightly drizzle olive oil and liberally sprinkled with fresh or dry basil, parsley, oregano, sea salt and garlic powder (early on, I had trouble with garlic and onion powders ... I wonder about their chemical processes used in making them ... research needed). 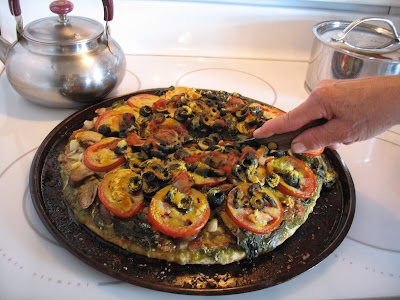 By the way, these final particular pizza toppings aren't for the candida person. People with systemic candida cannot have mushrooms (fungus!), olives (fermented plus acidic with vinegar!), sprinkled with nutritional yeast (created from a fermentation process!) instead of using cheese (a dairy derivative and loaded with aged bacteria!).
Step 6: Bake the pizza for about 40 minutes at 350 degrees.

This crust has many uses. I've used it for making crusts for vegie pies and quiches, for making hand-held stuffed pies and calzones (add a couple tablespoons of flaxmeal for thickener or the dough with break), and also for quick wrappers for vegetarian "pigs-in-the-blanket". I've never tried it for tortilla-like salad shells but I supposed it could work quite well. For a sweeter crust, use coconut oil and eliminate the herbs, possibly adding cinnamon and cloves.
Posted by Cheryl Magnant at 10:06 AM