An Overview of Candida Albicans (Yeast)

Candida albicans, also known as yeast infection, candidiasis, thrush, candidosis, moniliasis and oidiomycosis. In most cases from the age of 6 months, the majority of population has this bacteria in the intestinal tract. However, candida albicans is not the only type of candida, for in fact, there are as many as 81 identified kinds! Candida albicans is the one which happens to get the largest diagnosis, probably because the symptoms become most apparent - e.g. a white film in the mouth or on the tongue, fungus in the nails, vaginal discharge, and other vaginal and penile fungal problems.

The following information was taken from an article written by Gary Farr. I recommend reading more about candida on this site as Dr. Gary Farr packs in a lot of information that is well organized and an excellent overview for the candida problem. The information below are excerpts, but keep in mind that when the term "candida" is used, it does not necessarily have to be candida albicans.

Facts to know about candida:

... Candida can occur both in the digestive tract and can spread systemically.
... Going from doctor to doctor and switching from product to product is not a solution to handle Candida.
... Candida has the ability to change from a yeast and become a fungus. As a fungus it operates in a similar fashion to any other fungus such as athletes' foot fungus, etc. Candida is kept at low levels by the friendly bacteria that also reside in the digestive tract.
... Candida creates chaos in the intestines and diseases of which the doctors have little or no answer and can use only medicines to treat it.
... Candida can spread throughout the intestinal tract causing bloating, gas, food reactions and allergies, constipation, diarrhea and a host of digestive complaints.
... Any medication or drug that can cause a gastrointestinal side effect may cause yeast growth by disturbing friendly bacteria.
... Many people have a low iron content because this mineral is hard to absorb when Candida is present, and therefore have little oxygen in the tissues.
...Candida itself is totally preventable and if you have this condition, there is a special way in which it can be completely and permanently eliminated.

Hmmm, on this last point. Since the "good" bacteria feed off of candida, why would I want to completely and permanently eliminate it? And how on earth is that possible since it's a shape-shifter?!?!

... Yeast secrete an enzyme that digests the lining of the intestines.
... Yeast shifts the immune system from Th1 to Th2. This sets the stage for allergies and viral infections.
... Yeast enzymes break down IgA. IgA is the most predominant type of antibody that is found covering the gut mucosa. IgA keeps toxins and bacteria from binding to the cells that line the intestines. Without enough IgA, the intestines become inflamed, and the lymphoid tissue in the gut swells.
... The byproducts of certain yeasts or fungus are able to alter the bacterial content of the intestines. (The fact that fungal metabolites can do this should come as little surprise. Many of our antibiotics are made from molds.)
... Candida secretes an enzyme that reduces the body's ability to kill Staphyloccocus aureus, a common pathogen in human intestines.
... Yeast creates toxins like tartaric acid, acetylaldehyde and arabinol that interfere with the body's ability to produce energy.
... Drs. Truss, Galland and Ionescu have all measured reduced levels of amino acids, imbalances of fatty acids and deficiencies of various vitamin and minerals in their yeast syndrome patients. In particular, yeast reduce the body's coenzyme Q10, coenzyme B6, alpha ketoglutaric acid, taurine, and asparagine. Some types of yeast promote the formation of pentosines. These create a functional deficiency of B6, lipoic acid and folic acid.
... The most dramatic proof of harmful yeast toxins comes from the Great Plains Laboratory. Tartaric acid from yeast causes muscle weakness. Dr. Shaw discovered very high levels of tartaric acid in the urine of two autistic brothers. Both had such severe muscle weakness that neither could stand up. When treated with an antifungal called Nystatin, the tartaric acid measurements declined, and the children improved. When the Nystatin was discontinued, the tartaric acid levels rose, and the children got worse. Often, Dr. Shaw also finds tartaric acid in the urine of those with fibromyalgia, a condition characterized by muscle pain, poor sleep and tender points.
... Yeast can be present in the intestines even if they don't show up in a stool culture. Dr. Leo Galland has shown that the yeast can be damaged and not grow in a culture, even though the yeast were present in a stool sample.
... The most harmful place for yeast seems to be in the small intestine. This was shown in a study of children with failure to thrive. Biopsies of the upper small intestine were taken and were examined with an electron microscope. The yeast were embedded in the intestinal lining in their invasive fungal or mycelial form. Some of these children had no yeast showing up in their stool. Yet the yeast in this first part of their intestinal tract was interfering with their nutrition. 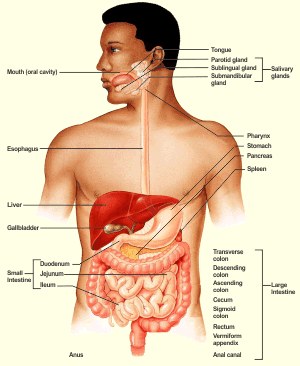 "Candida is a yeast that lives in the human digestive system. It has the ability to change from a yeast and become a fungus. As a fungus it operates in a similar fashion to any other fungus such as athletes' foot fungus, etc. Candida is kept at low levels by the friendly bacteria that also reside in the digestive tract. The friendly bacteria feed on the Candida, thus a balance in the body is maintained. Modern medicine's "gift" of antibiotics, birth control pills, cortisone and chemotherapy kill this friendly bacteria as do street drugs, alcohol, and junk food diets. Once this friendly bacteria has been destroyed, the yeast begins to overgrow and take over the digestive system. Left untreated, it becomes a fungus and grows into a plant-like structure complete with roots. These roots can break through the intestinal walls, allowing the yeast to travel to other areas of the body such as the sinuses, throat, reproductive organs, the lungs and skin just to name a few. It is capable of producing over 100 symptoms. This makes it extremely frustrating for anyone with this condition to be able to find out or understand what is exactly wrong with them.

"Billions are spent each year on antibiotics, creams, nasal sprays, unnecessary hospital visits, operations and antidepressants, due to the ignorance and arrogance of the medical profession. It is written in their own journals that antibiotics can cause this condition, yet they continue to boldly prescribe them and are resentful when discussing their side effects. One doctor who was backed into a corner on this subject during a radio talk show became hysterical with fear and began screaming, "THERE'S NO SUCH THING AS CANDIDA!"

Well, this has been my experience with candida. Modern-day medical doctors, following the Greek Hippocratic school of thought, that is, demarking a clear separation of body and mind, do not recognize the multitude of symptoms created by candida as stemming from a bacteria wildly out of control. Instead, non-holistic treatment is performed. Namely, if a patient has an ear-infection, that patient is never questioned about any other possible occurring symptoms - the ear is the sole location of treatment.

For patients with systemic candida who more than likely have a bizarre assortment of ailments, doctors feel forced to prescribe prescription drugs to manage the symptoms. Or if looking for the source but no specific bloodwork problem surfaces, then, since the body is "obviously not ailing" it must be the mind ... and psychiatric treatment is prescribed, blaming the patient's mental state rather than admitting a physical state unknown to the doctor. I've heard many doctors tell me that I didn't have candida, or "Of course you have candida, everyone has it", which is true, but doctors in my experience don't admit that candida is the source of the problem. Haha, I can imagine many of them wanting to scream at me, "THERE'S NO SUCH THING AS CANDIDA!"
Posted by Cheryl Magnant at 2:50 PM