My parents have had an Ionic Detox Foot Bath for 2-3 years now. They try to give themselves a detox foot bath at least once a week, and on the days that they do one (40 minutes) my mom says she feels lighter in the feet and happier in the mood. Dad isn't quite so analytic but his Parkinson's tremors do seem to be lighter on the day and even the following day that he takes a foot bath. The only problem with giving him a foot bath is that he has to get up quite early in the morning before he starts taking his schedules medicines for the day in order that the foot bath won't detox/remove the necessary drugs from his system. He needs those drugs, sad to say. And after taking a foot bath, he's quite exhausted and sleeps for about 2 hours, but when he wakes up, he's more alert than usual.

I've taken the foot baths too when I'm at home, and also feel better - like my mom, lighter in the foot but in general more alert. It's rather disgusting the amount of detoxing that comes from the feet. To do the detox, of course you need the ionic detoxer, 1/2 teaspoon of sea salt to activate the tub of warm water, an electrolyte drink (because of candida I can't do the frequently used drinks so fresh squeeze a lemon in a quart of water) to drink throughout the detox in order to keep electrolytes in the body and to stay properly hydrated, a 40-minutes timer, and a book to read! More specific directions are in the following picture: 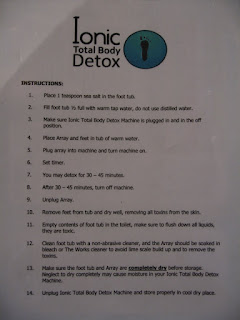 The ionic detoxer is to be used a maximum of 45 minutes as it not only pulls toxins out of the body but much needed minerals and electrolytes. 45 minutes max! 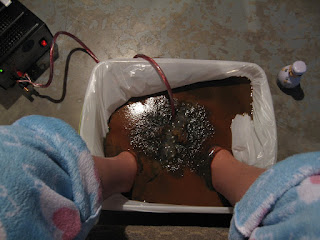 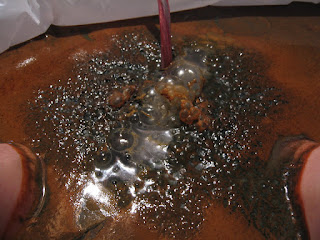 This last picture showed a lot of black, brown and orange particles which, according to the printout, suggest that I am detoxifying from my liver (heavily) and from my joints. There's also a bit of white foam although I have to say it's rather minimal compared to last summer! The white foam suggests detoxing from my lymphatic system. When the water is poured down the toilet (it's toxic so not to be poured into a sink), white particles or red flecks or black flecks can be seen which reflect detoxing from other body areas - refer to chart below for more clarity. 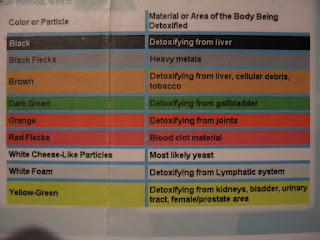 Posted by Cheryl Magnant at 7:59 PM