Hurray, hurray, hurray! I've been fighting vitamin A deficiency for almost 2 years now, to no avail (discussed in Huge Vitamin A Deficiency). Candida destroys vitamin A, but then also many of the candida killers I was using (oregano oil, grapefruit seed extract and I strongly suspect Barlena's Olive Leaf extract) also destroy it. I tried taking large doses of vitamin A in oil gels and later in the dry form, but had no results. Then I bumped into a passage in the book Supplements Exposed that said that taking the supplement vitamin A will not boost vitamin A but will actually impair it. I had just gone through a lot

of vitamin A gels and thought I'd test that theory, because I didn't know what else to do. So for the two months almost every day I gobbled up more high potency vitamin A capsules (the dry kind this time), retested, and yup, the outcome showed virtually no change. I know that vitamin A needs iron, oil and other nutrients in order to become assimilated well so there might be other underlying problems why I didn't absorb any of the nutrients. So, I decided I would do it solidly through a diet saturated in vitamin A-rich foods.

So for the past 2 1/2 months I have been taking large doses of Pure Hawaiian Spirulina Pacifica, rich in vitamin A among other large doses of immune building nutrients like vitamin K for the bones and heart, vitamin B12 which vegetarians and vegans especially need, iron which is so important for women, and 2 trace minerals, manganese and chromium. [On the Hawaiian spirulina label the suggested amount is 1 teaspoon up to 3 times a day. I took 1 heaping tablespoon once a day.] 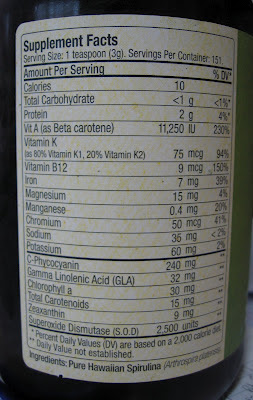 Ah, synergy of vitamins in their natural state and working in correlation with one another rather than just the isolated vitamin A in supplement form! Almost every morning I ate 2 tablespoons of chia seeds [the packaging suggests 1 tablespoon a day and elsewhere I've read to not eat this daily beyond one month as side effects are unknown]. The chia seeds are said to be rich in vitamin A (I've never found out nutritionally how rich though, but hey, I can't eat the vitamin A-rich foods like carrots, winter squash, sweet potatoes and other highly glycemic foods so I just went with hearsay on this). Anyway, my wonderful vitamin A outcome just came back .... NORMAL!!!!


That's a whopping increase of .24 in just 2 1/2 months!!! The last 2 1/2 months I've really gobbled up tons of vitamin A-loaded asparagus too, tried to include a little oil in each of my green smoothies to help with vitamin A assimilation, and faithfully drank my spirulina and ate chia seed pudding. Yes! Finally!

And just a comment on that "normal" range above for vitamin A. I've been testing at the same clinic (a testing practice which assures a more standard reading of test outcomes) for the past 2 years, and until just a few months ago, the "normal range" for vitamin A listed on test results print-outs was .36~1.20. However, about 6 months ago that range got drastically shifted, and shockingly the "norm" for vitamin A was reduced! The "normal range" now reads .30~.70. I can understand why the range was lowered - there is great fear of vitamin A toxicity, and in fact, many of the symptoms for toxicity and for low vitamin A are the same. Go figure that one out! But for the range to actually be lowered indicates to me that the USDA/FDA/who? is becoming more accepting of the lower and lower numbers of vitamin A and is accommodating their figures to match the common, a.k.a. "normal", populace. A big study on this needs to take place.

Animal Pharm, a site dedicated to blogging about nutrition on global issues, detailed a list of diseases that low vitamin A plays an instrumental part in. But before I reintroduce the list, the site also presented that the marbling of meat - human abs, glutious maximus and biceps as well as beef - is a direct cause of insufficient vitamin A in the body. Now everybody wants to present tight shapely muscles, and yet people tend to go for the choice cuts of well-marbled meat. These two desires are in direct opposition of each other and reflect two opposing standards. Humans have the standard of desiring no marbling in their own muscles (and therefore, have the unknown desire to have adequate amounts of vitamin A) while they desire the appealing look of well-marbled meat, a grade A cut (which unfortunately could be an indication of a vitamin A deficiency in the meat, and therefore in actually a substandard cut!). This blog entry is a must read!

Who might be vitamin A deficient?
..... vegans
..... those who eat 'low fat'
..... those who don't consume a lot of wild seafood/grassfed meat
..... children less than age 4 and women
..... those with cancer
..... chronically ill
..... those with infections or high CRP (chronic restrictive pulmonary)
..... those with Hashimoto's hypothyroidism
..... those with other autoimmune diseases: Grave's, RA (rheumatoid arthritis), SLE (systemic lupus erythematosus), Sjogrens, MS (multiple sclerosis), NASH (non-alcoholic steatohepatitis), primary biliary cirrhosis, CAD (coronary artery disease), etc
..... those with skin conditions (again, autoimmune origin and wheat-triggered): eczema, rosacea, skin cancer, poor wound healing, atopic dermatitis, psoriasis, dermatitis herpetiformis, porphyria cutaneous tarda
..... those with gluten enteropathy, (known vs. unknown) wheat/casein allergies, 'leaky gut' and a poor intestinal barrier which prevent absorption of fat and fat-soluble vitamins
..... those without a gallbladder who may not produce sufficient digestive enzymes to absorb fat and fat-soluble vitamins
..... those who take Orlistat/Xenical or OTC Alli (weight loss pills which block fat and thus fat-soluble vitamins A, D, E, K1, K2)
..... those on antiseizure drugs (valproic acid, carbamezepine, phenytoin which increase metabolism/elimination of vitamin A)
..... those who have had gastric bypass which unnaturally cuts out a great portion of our most important absorptive surface area for fat and nutrients, the duodenum
..... diabetic-induced rats fed vitamin A deficient lab chow
..... Inuit children with frequent lower respiratory tract infections and otitis media [the children are probably no longer consuming their traditional H-G-fish Paleo diets but the S.A.D. (standard American diet) grain-based one like Americans]
..... third world countries where night-vision blindness is prevalent

Posted by Cheryl Magnant at 2:26 PM