The cilantro was beautiful at the foreign foods mart in Itaewon so I bought 3 large bunches, 2 large bunches of parsley, a massive chunk of ginger and then came home and made killer cilantro pesto.


In the BlendTec put in the cilantro, olive oil and lemon juice and whiz. It's easier to whiz the greens bit by bit so not as much olive oil is needed - seems healthier that way. Add the parsley and whiz, then the young green onions, garlic and sea salt and whiz. Lastly add the whole almonds and tomatoes and whiz just enough to break them up and give texture and bits of separate color to the mix. And wah-lah! Serve, and expect great flavor when especially biting down into a mouthful that has distinct bits of almonds ... it's like getting a sudden burst of Parmesan cheese flavor!

I also made a whole pile of burgers, and in fact, I made so much mixture that it would have taken forever to bake them in my small oven, so I made one pan of "burger" wedges. 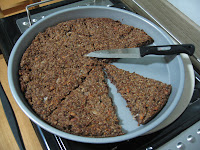 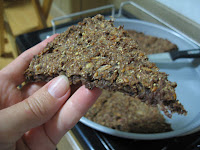 BTW, I threw these together quickly but they have lots of food processed vegies (cabbage mostly), black-eyed peas mashed, cooked brown rice for softness and moisture retention, coarsely chopped walnuts, and a small amount of whole grains whizzed in the BlendTec to a coarse flour (quinoa, millet and black rice). They have an almost "meaty" texture and flavor. I made some in a casserole dish as if it were a meatloaf, and it really turned out great. After it cooled, I chopped it all up in large squares and froze it for times when I need a quick meal and only have time for a salad. Smart planning, I think. 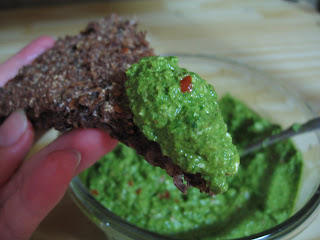 Batch #2 of the cilantro pesto was made with hemp seeds along with the almonds. The hemp make the pesto seem more substantial but I also noticed that the cilantro was more subdued. I like loud cilantro flavor for some things, and this rounder flavor for others. This second batch also had a few more young green onions, and I really like the harmony of green onions and cilantro in pesto. That was a great improvement. 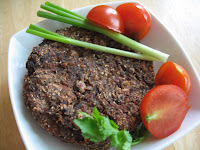 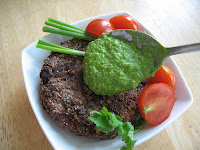 I'm getting more and more inspired by sites that are all living whole foods, that is, they are all raw and have sprouting life. I'm not quite prepared to go all raw but I'm regularly upping the percentage. Since mid-October I've been about 70-80% raw, and  I LIKE it! My muscles feel more supple, I don't feel tired during the day, and I love the bounce in my step. This is great! I'll bet I can adjust the burger recipe above to only raw food and put it in the dehydrator to "make bread". Hmm, I challenge myself ... so wait and see the results :)
Posted by Cheryl Magnant at 10:17 AM