Cancer, Candida and the Spit Test

Candida is a yeast that is present in the bodies of 100% of people who have cancer. If cancer were a tree, candida would be the soil. Cancer cannot exist in a body that doesn’t contain candida. A perfectly healthy person has no candida, but you can be reasonably healthy with candida. Everyone who’s taken a pharmaceutical antibiotic in their life has at least some candida in their body unless they’ve made an effort to get rid of it. Several treatments that are known of in the world of alternative cancer research are treatments which do not attack the cancer; they attack the candida. If you get rid of candida, cancer dies, shrinks, vanishes. A person with no candida cannot have cancer.

Here’s a simple spit test you can do to monitor your candida levels:
Put a glass of water beside your bed at night so you can access it easily when you wake up in the morning. In the morning, spit into that water. Don’t make any efforts to make any more of a gob than whatever is in your mouth. Wait fifteen minutes, and then stir it a bit. Then observe the cup. If your spit is floating on the top of the water, or if it’s dissolving or if it has dissolved, you don’t have enough candida for cancer to form — you’re healthy. But if your spit has formed a cloud or if it’s got leggy strings, you’ve got enough candida for cancer to form and thrive.

Another interpretation of the spit test (a basic Candida evaluation test):
The Candida saliva or spit test is a simple test that can be carried out at home and, proponents say, diagnose any form of Candida or yeast-related illness. These illnesses may be referred to simpy as Candida or variously as 'Candida-related Complex', 'Systemic Candidiasis', 'Candida Overgrowth' and the 'Yeast Syndrome'. It is recommended by a number of natural and alternative health care practitioners. 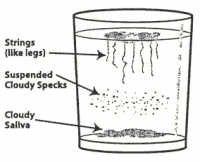 How the Test is Performed
The Candida spit test is very simple. Before going to bed at night, fill a clear glass with water and place it at your bedside. When you wake in the morning, before you do anything else, simply work up a bit of saliva and spit into the glass of water. It is said to be important that nothing enters your mouth or touches your lips before you do this. Sources recommending the test instruct us not to drink any water, brush our teeth or even kiss your partner. After spitting, look at how the saliva looks and then check again 2-3 times every 15 minutes.
Interpreting What You See
Proponents explain that the test should be interpreted as such:
It is suggested that the more strings and cloudiness there are, and the faster this develops, the greater the Candida albicans overgrowth.
An Explanation of the Test?
There seems to be no legitimate explanation or rationale for the Candida spit test and many people report having taken the test and it been "negative" only to find that more reliable tests such as Candida antibody testing, gut fermentation profile, urinary organic acids, or a simple treatment trial reveal Candida may have been a problem after all. Reportedly people who are perfectly healthy frequently test "positive" as well, suggesting the test is not reliable.
The origins of the test are also sketchy. A number of sites on the web suggest that it was invented by (or at least heavily promoted by) Global Health Trax Inc. which sells the Threelac (and now Fivelac) probiotic products. Does this suggest that it has been promoted as a marketing tool?
Everything considered it would be wise to do your own research and ask your health care provider if you have done this test and want to know what to make of your result.


Material taken in its entirity from the EIR (Environmental Illness Resource).
Posted by Cheryl Magnant at 8:19 PM