Often times for breakfast I make some chia pudding or throw a bunch of vegies in the blender for a morning vegie blend. I've even thrown in a good spoon of lentils, millet or brown rice to give a little more sustenance to the blend so I can make it energy-wise to the noon meal. But today, with my rice cooker still warming last nights millet, I thought I'd make my breakfast treat - a real hot breakfast cereal!

Blend all ingredients to a gruel. Should be easily pourable and not pasty. Sprinkle on a little more cinnamon or cloves. Garnish with a couple of almonds and serve hot!

Today in my lunch I've packed a whopping amount of green vegies and won't indulge in nuts again today, so even though the GI track has some carb coating, it shouldn't hurt me too much, especially as the coconut oil should help lube the way and the ginger is an anti-bacterial, anti-inflammatory. Always aiming for balance :) But what a treat! I do love my hot "cereal" breakfast bowl in the a.m.! 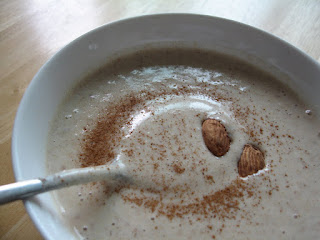 *** Hurray! I'm finally able to eat ginger again. Had a personal sensitivity to the wonderful detoxing stuff several months ago so did like books say, avoided the food causing sensitivites for six months before reintroducing it. Yeah, it seems to have worked! Am also using a firmer type of ginger than than the knotty skinny one with higher moisture content and which seems to mold easily. (See North African Millet Stew w/ Greens for reference to former sensitivity)

Variation: Adlay (a gluten-free grain) and almonds made in the same way. I omitted the ginger and added a couple dashes of cardamom and coriander to the blender. Turned out as expected - tasty! 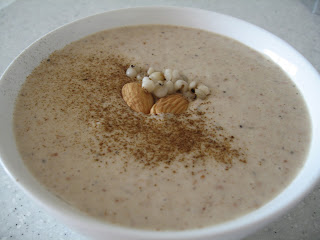 Posted by Cheryl Magnant at 9:30 AM