Hurray, another year of life! In the Far East, red is an auspicious color for the new year, albeit the color red is for the lunar new year and not today, the solar new year. Anyway, here is an auspiciously red dish for kicking off 2012, the Year of the Snake. And btw, this red dish in looks and flavor goes splendidly with black beans and brown rice with a huge green toss salad.

Some preparation and fore-thought is needed for this recipe, so plan ahead. In the a.m. before going to work, soak 1/2 cup of dehydrated organic rose-hips (the kind without seeds). Put them in at least twice to three times as much water to soak, and 8 hours later, they're rehydrated and ready to use.

The cooking process: In a fry pan, saute a large onion and the 25 or so garlic stems (often available through Asian stores). Add water gradually but not too much as this is not soup but just a sauce (see pict for amount). When the vegies are tender and still bright in color, add in the greens, the seasonings and stir together till the greens are limp but still retain their color. Turn off the heat and pour the rehydrated rose-hips on top. The rose-hip syrup will be somewhat thick and sweet [hmm, I wonder about the glycemic count but have been unable to find any reference online, so this is just a treat]. The rose-hips might also contain some hard seeds or rose-hip tops, so remove them before stirring in. I usually let the vegies cool a few minutes because rose-hips are extremely high in vitamin C, which is killed by heat ... so the trade-off is a cooler sauce but with maximized vitamin C. 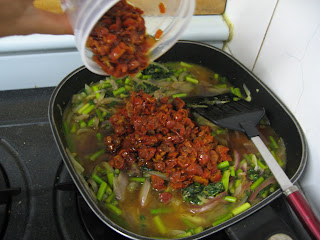 This particular sauce was made with some flat garlic stems I found at a local Vietnamese store while at home. Personally I think Korean garlic stems are much more pungent and certainly are firmer, but the ultimate flavor was relatively the same. And, natural lighting certainly made this dish gorgeous as all food should be! 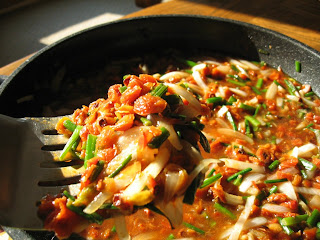 And now with the rounder, firmer garlic stems in Korea. 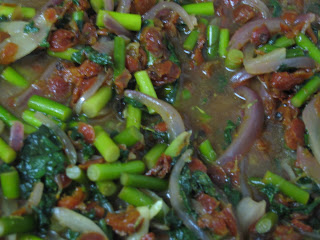 Here is my final sauce. I served this particular batch up with black beans and brown rice and then mixed everything together. 'Twas good but I like a little more chili-like flavor so ended up sprinkling more cumin on top ... and then ... great vegan chili substitute! 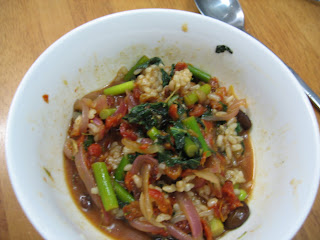 Posted by Cheryl Magnant at 2:44 PM