Almond "Milk" is especially tasty in the evening with a book. I try not to eat or drink anything "solid" after 8pm as the digestion starts to shut down for the night, based on people's natural biorhythms. So this drink is for the pre-8pm hours.

To make Almond "Milk", either use previously washed and soaked nuts or soak the nuts 8-12 hours in advance, pouring off the liquid after at least 8 hours. This liquid is tasty, I know, but it is full of toxins and dust. My aunt who has acute celiac's disease even has to pick her own nuts (I think principally walnuts) as in the processing, the rollers are lightly dusted with flour, and you can bet that flour is the cheapest on the market, wheat aka gluten! So there might be trace amounts of many unwanted things on or in the tough skin that should be removed. And I'll testify that since I started cleaning nuts this way, I can eat nuts again. Before, they made the lining of my mouth swell or I had other reactions, probably based on the amount of mold and pesticides in the skins. Soaking takes time and pre-planning, so I keep a big bag of pre-washed and dehydrated nuts in the fridge for my little Almond "Milk" emergency fixes :) 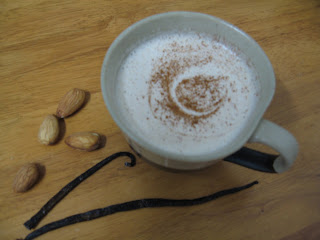 In 3 cups of water, blend 2-3 handfuls of nuts. Add a little cinnamon and a dash of cloves. On special occasions I even indulge in a little non-alcoholic vanilla that has several vanilla beans shoved down in it to REALLY intensify the taste. Then in my BlendTec I blend the mixture once and sometimes twice on the "soup" cycle, which heats the liquid. When finished, I have a foamy, luxury hot drink to sip over a good book! 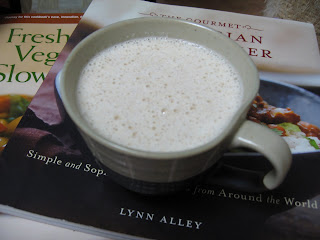