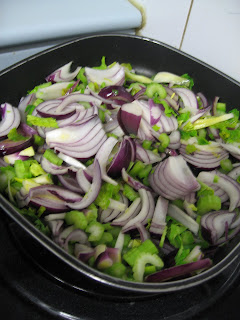 Ha! Found the stir-fry pictures of my Thanksgiving stuffing. Most of my friends enjoyed it but a couple were expecting something more "bready" and one of the kids absolutely hated the whole nearly raw cranberries and out-right said the taste was disgusting! Hahaha! The honesty of kids :0 ... but I have to say if I tried to feed this as "stuffing" to my more open-minded friends who didn't know why I'm eating the way I am, they probably would have been a little less tolerant to the lack of sweetness (wow, cranberries can be very tart!) and lack of breading. I think to stave off expectations, just calling it a cranberry vegie stir-fry would make it a much more popular dish. Anyway, I quite like the earthly flavors and don't miss the breadiness at all. Well, if something made you sick every time you tried it no matter that you loved the flavor, you would learn pretty quick to dislike it too ... if not, wow, I'd say an addiction would need to be addressed.

So, to make the "stuffing", slow saute a pile of onions and celery, some garlic too if you like. Then add in your chopped vegies like zucchini, asparagus or even broccoli and a few cauliflower florets. I've been on this ultra-strict candida diet for a year now, and wow do I feel better and am almost pain-free, so I thought I could add just a short couple of inches of a carrot for color. That would only be less than half an inch if the stir-fry was divided into 4 servings, maybe manageable I think at this point. Salt and seasoning was added at some point and of course a lot of garden herbs, although I can't remember which ones, parsley, basil and marjoram for sure though.

After the vegies slow-cooked down, I turned off the heat and threw on a bunch of washed frozen whole cranberries and a couple big handfuls of walnuts, the walnuts that I'd pre-washed and put through the dehydrator. I didn't want them to cook so didn't stir them in until the "stuffing" had cooled down a bit. 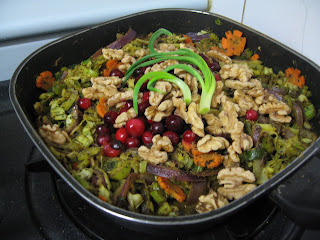 OK, so this isn't exactly bread stuffing, but with a lot of garden herbs added to the base of onions and celery, the taste of stuffing is definitely appreciable. Yum with Garbanzo Bean "Mashed Potatoes" and slices of leftover vegan "turkey"!

And here's a picture of a later batch made around New Year's (backposting 'cuz the pict turned out so well, with flavor to match). 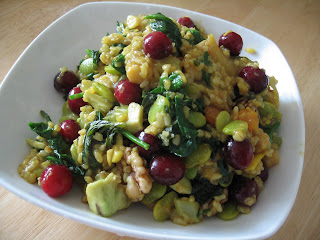 Posted by Cheryl Magnant at 8:08 PM