Eating freshly cooked, well-hydrated beans and rice with vegies is very supportive and rejuvenating to tired, overworked adrenals glands, but life with baked breads, fried breads, toasted breads, and other breads is sooo much easier for traveling ... but oh so hard on the compromised digestive tract not to mention the adrenals. Sigh. On weekends, I like to travel WITHOUT of course carrying heavy, somewhat messy lunch boxes, and especially ones that need refrigeration. So I thought I'd whip up something exotic for a little weekend getaway -- something bready and not requiring constant refrigeration, also something easy and light to travel with, but something still nutritious, filling and non-glutinous. 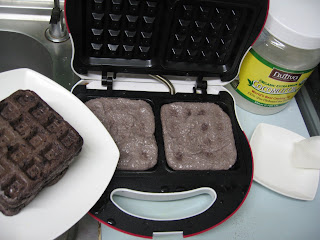 Again for this recipe I blend my own whole grains into flour just prior to making the waffles in order to have maximum health effects of whole food nutrition that's been "processed".

Step 1: In the BlendTec whizz the dry ingredients into a flour (black rice, buckwheat, flaxseed, cinnamon, cloves and sea salt).
Step 2: Add in the wet ingredients (water, drained almonds, coconut oil and vanilla) and whizz to a thick but pourable batter. You will need to adjust the water as this recipe (as always) is by eye-ball measurements.
Step 3: Pour the batter into a lightly oiled hot waffle griddle. In the picture above the small square dish in the lower right hand corner contains coconut oil and a paper towel for whisking the oil lightly onto the griddle - works excellently.
Step 4: Cook the waffles till done. I needed to flip the waffles over to cook the tops better as they are a heavier batter than light wheat waffles with leavening. Without the (chemical) leavening the waffles will be more substantial but also will take more time to cook, about 15 minutes per waffle. When in my mom's kitchen and cooking for four, I pull out three waffle griddles and keep them going! What a set-up but no such luxury in my rinky-dink kitchen. 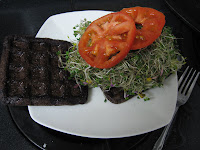 Why do waffles have to be culturally limited to breakfast? Since these waffles and some flatbread I make with garbanzo flour are my only "breads", I eat them indiscriminately and for any meal. As yet I'm not eating fruit (too high of a glycemic count), so eating the traditional breakfast waffle without fruit or syrup topping is just out of the question. Sometimes I mix up some nuts (always pre-soaked), hempseed, coconut oil, cinnamon, cloves, cardamom and coriander mixed with a quarter of an apple and use that as the topping!

Lunch can be a sandwich between the waffle "breads". Here I've "buttered" my waffles with a little coconut oil and plopped in a large wad of sprouts, which need to be washed VERY well - bacteria and e.coli lurk in poorly washed sprouts! Top with a tomato slice or two, and a nut or seed dressing. After this picture was taken I remembered a sunflower seed and millet dressing I made yesterday. Wow, it brought out the fresh sprouts and complemented both in appearance and in taste the buckwheaty flavor. 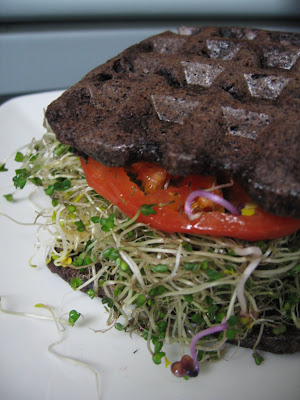 For supper waffles can make scoops for hummus and cucumber salads and other Indian dishes. I eat vegies at about every meal so why can't waffles be a lunch or supper food too?
Posted by Cheryl Magnant at 11:43 PM