Socca originates from Nice in the south of France, but variations of it exist in northern Africa where a variation of it is called kalinti, karane or karantika in Morocco and garantita in Algeria. The kalinti popular as street food in Morocco gets its name from the Spanish word for hot, caliente, for it is usually served hot with the spices of cumin and harissa. Kalinti is more flan-like with egg and milk mixed in the batter than the thinner, crispier socca de Nice of France and farinata of Italy [farinata literally means "made of flour"], but all recipes rely on the key ingredient of garbanzo bean flour. That said, however, some garbanzo/chick pea flour is unroasted (as in this recipe) while others may use besan (or gram flour), which is made from roasted chickpeas. Chickpea or garbanzo bean flour is widely used in Asian, Middle Eastern, Indian, Pakistani and Bangladeshi cuisines, not to mention northern Africa, and so can easily be found in many ethnic stores.

Chickpeas/garbanzo beans are gluten-free and chock full of fiber. In fact, between 65-75% of the fiber found in the beans is insoluable, which means they remain undigested down to the final segment of the large intestine. "Recent studies show that bacteria in the colon can metabolize garbanzo bean fiber and produce short chain fatty acids (SCFAs), including acetic, propionic, and butyric acids. These SCFAs provide fuel to the cells that line your intestinal wall, lowering your risk of colon problems, including cancer." But because of their high fiber count, garbanzo beans may be too tough for some bodies to breakdown, and so it is recommended that the garbanzo bean flour be pre-mixed or at least allowed to sit for 30 or more minutes to assist the body in breaking down the complex starches and aid in mineral absorption.

The Versatility of Socca

Socca, as a gluten-free fibrous "bread" can be an excellent alternative to white flour tortillas, pizza dough, crepes or flatbreads. It can be folded over to make a sandwich wrap and stuffed with favorite ingredients, used as a foundation for a rustic pizza (see the Whole Daily Living recipe) and topped with avocado, olives, spring lettuce, zesty radish sprouts, a drizzle of olive oil and flaked dried tomatoes. And many different kinds of seasonings can be added to create a wide variety of flatbreads/wraps/chips/tortillas/pancakes/doughs. Here are some options:

Much of the above info was taken from Meatless Monday: Socca (highly interesting with very attractive pictures) and Kalinti, Moroccan Flour and Egg Tart.

My basic socca recipe (seen in a vegetarian cookbook)

One of my many socca recipes - with tomatoes and fresh garlic and basic on top! Notice how thin and crisp the socca came out - yum! Later I started adding Italian seasonings like rosemary, thyme, marjoram, basil and/or parsley to create a more flavorful gluten-free "bread" to accompany my many salads and vegie meals. Perfect because they aren't too high in carbs and they are so tasty! 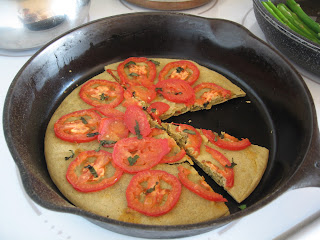 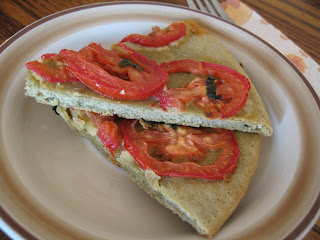 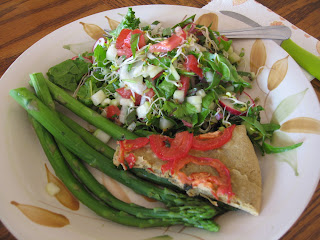 Variation: We had a leftover raw broccoli, cauliflower and radish salad that needed to be eaten. I just added it to the original batter plus an egg or two, some seasonings and topped with tomatoes and this was one excellent delight! My brother couldn't keep his hands out of it until it was sadly ... gone! 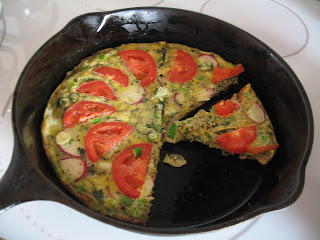 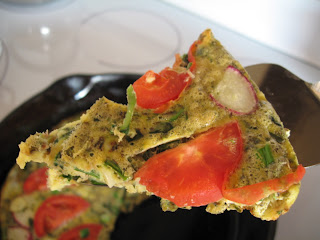 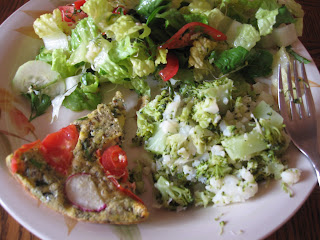 And then here's one of my all-time favorites, not made in a hot skillet which makes the socca crispy, but on a flat baking sheet oiled with coconut oil. Socca seriously takes only 5 minutes to whip up! First, mix the 1 cup of garbanzo bean flour and 1 cup of water, the oil and salt. [Best to let sit for 30 minutes or make the night before and refrigerate ... just to help break down some of those heavy starches.] Then in an oiled cast iron fry pan, which is perfect for crispy socca, pour the batter and bake for 20-30 minutes (depends on thickness and volume) on 350F. And serve hot!

I served these with "Italian butter", a mixture of herbs (parsley, basil, thyme, garlic and sea salt) in olive oil for dipping. Scrumptious, and the Italian butter is now what we use on corn instead of butter ... well, I don't eat corn because it's highly moldy and almost always a starchy, sugary GMO, but I fix it for everyone else :) 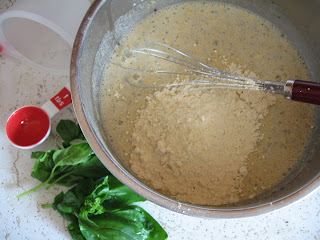 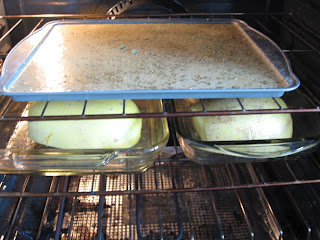 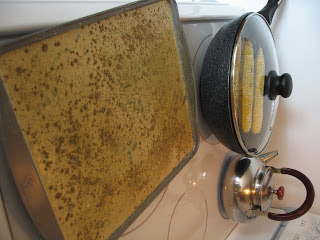 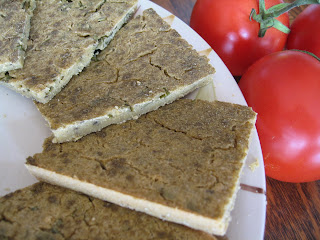 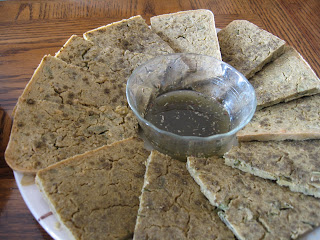 Another variation: This one had an egg added and then chopped parsley and a lot of snippets of leek stems. I added some garlic of course and a dash or two of both thyme and rosemary powder. Socca goes really great with a leafy vegetable salad and a hydrating vegetable juice! 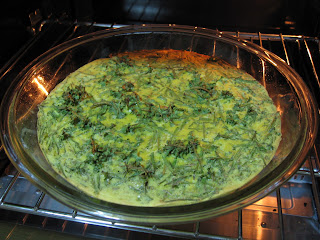 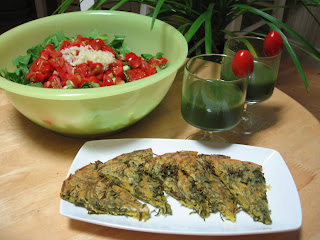