﻿
One of my American friends was asking how to make Korean 파전 (green onion "pancake"), and I suddenly thought, "Hey, that might be doable with anti-inflammatory flour". Well, it is doable. Inflammatory wheat flour rises better and mixes better with the egg and definitely has a lighter taste, but my version hit the spot. I used a homemade blend that has buckwheat in it, hence, the dark color and perhaps some of the heaviness. I knew it would come out heavy but was too lazy to dirty the blender for whizzing another batch of flour that would be light - e.g. quinoa or brown rice. No matter the flour, I had something crispy for a change. 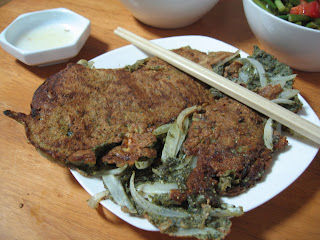 Whip the eggs. flour and seasonings to a batter, and then batter in the onions and pour the whole concoction in a hot frying pan with olive oil. Cook both sides till done. The egg makes the "pancake" crispy, but for those wanting a vegan "pancake" it is possible to skip the eggs by adding 1 heaping tablespoon of flaxmeal to the other ingredients and 4 tablespoons or so of water, and then of course waiting a few minutes for the flaxmeal and water to form a gel.

Koreans have many kinds of 전 ("pancake") - green onions and seafood laid on top of a batter poured into the pan is a very popular kind, but then so is shredded potatoes and garlic fried perhaps with an egg and a shake of flour to make a very thin flat potato pancake. There are more. Frequently these "pancakes" are served with groups of people who share communal "pancakes" and drinks. They are also commonly served in wide variation in the mountains along hiking trails. The Korean "pancakes" have a short history. They originated during the Korean War when Koreans first had access to flour imported from the States. With no food because of war time conditions, they had few vegetables but with what they had they mixed with flour and water and fried the simple mixture ... and the Korean "pancake" was born. So tonight I did what the Korean did 6 decades ago. I took one vegetable and made a "cake" and called it a meal :)

Mix and dip! Usually Korean sauces are made of sesame seed oil, soy sauce and vinegars, but all 3 of these are inflammatory no-nos. This coconut-lemon sauce has an element of a sweet and sour combination and the tart citrus is brought out but somehow subdued into a pleasant tang. I think I'm in love with this sauce! 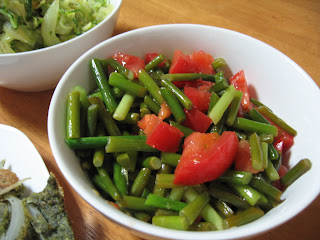 Lightly saute the garlic stems in the olive oil. The stems should be sauteed enough so that they are no longer extremely pungent, but not overly cooked so as to lose color or firmness. After the stems are sauteed enough, turn off the heat and let sit a couple of minutes to slightly cool. Then put the cut up tomatoes on top and drizzle the juice of one lemon and sea salt over everything. Stir and serve while colors are vibrant and flavors are at their peak. 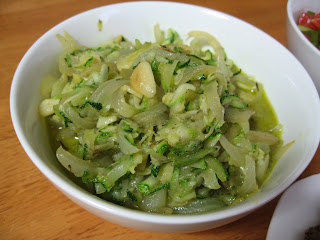 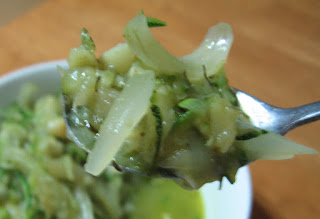 Lightly saute the onion and garlic in the olive oil. Then add the shredded zucchini and remaining ingredients and saute further till zucchini becomes tender but absolutely not mushy. Add a little water if/when necessary to prevent the ingredients from sticking to the pan, but moisture content should be relatively low. When done, the zucchini should be of a texture to easily spread on crackers, bread or just spoon into the mouth. Yum for ginger which kicks up the flavor while aiding digestion and fighting inflammation.
Posted by Cheryl Magnant at 10:06 AM