Another person, my friend L, responded to my cry of desperation on Facebook related to my reaction to bottled water. L wrote in my inbox that her husband had a precipitator which tested the purity of water and that I should come over right away and test my water. Some time during this morning after I left home, we decided that I should go over to her house today. I went but didn't have a chance to also get a sample of water from my own kitchen and another from my Brita water purifying jug that in desperation I bought at Costco yesterday.

Ergh, I do NOT want to drink tap water that has been "purified" through the little portable Brita jug. I don't trust the purification system, and think the city tap water is too horrendous here in Seoul, especially where I used to live (thank goodness I finally could move in February!). Anyway, I don't want to put tap water in my fragile system as THAT was what initially blew my system -- drinking city water, the divine Arisu that is marketed by our Korean President Lee Myung-bak as drinkable but which made myself and my two cats very sick (one cat died and Aulait and I have been sick sick sick since).

Anyway, my friend L picked up a new bottle of SamDaSoo at a local store and we went to her house to test it against her water from her reverse-osmosis Chungho water purifier.

To use the precipitator for best results, the water needs to be at room temperature. If it's cold, the results won't be accurate as the activating prongs need to heat up the water to room temp before the actual testing may begin. If water is contaminated, the water continues to heat up based on the number of minutes the precipitator is set at. We set the precipitator timer for 5 minutes but in less than 45 seconds a clear difference in the quality of water between the bottled SamDaSoo (left) and the reverse osmosis Chungho water (right) was obvious! If the water is relatively uncontaminated as the Chungho water appears, then the water does not heat up much beyond room temperature ... and the Chungho water didn't whereas the SamDaSoo was getting steadily warmer, and very steadily grosser, Grosser, GROSSER! 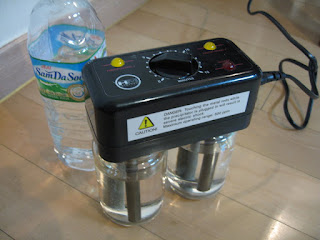 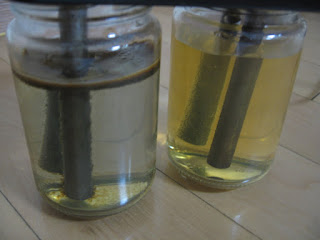 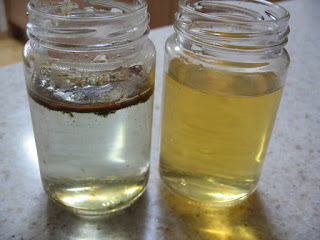 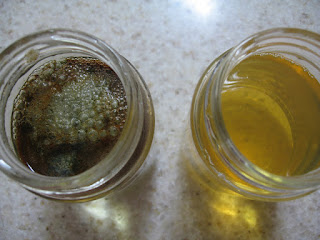 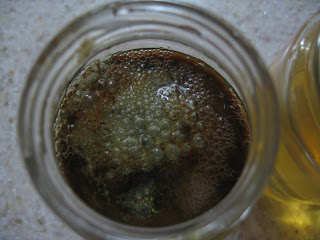 The printout for diagnosis of the quality of water based on its color after using the electrolosis devise was in Korean so I had to bring it home to translate. 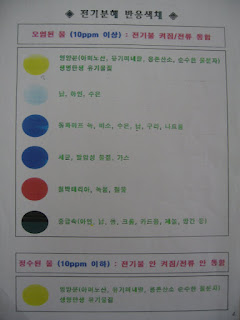 YELLOW is the indicator for water registering contaminants under 10ppm and therefore is safe to drink.

Now based on the 5-min electrical activation of the SamDaSoo water as shown here, the colors of the water do not appear to fall anywhere near the safe zone. In fact, very far from it! The water had a scum on top of it that seems to fall under "BLACK" which signifies heavy metals. The water itself is white and colorless. That seems good from a lay-person perspective since the bottle has a 2-year stamp for company considered safe shelf life. But yikes when you consider it! Is the company so confident that no bacterium is in the water and will grow in those 2 years?!?! And just WHAT did they do to the water that would give them such company-product confidence? But now to analyze the "WHITE" - lead, zinc, mercury. OK, we're talking heavy metals a-g-a-i-n!!!!!

Now if we were to analyze this a bit closer, we could cross-compare the disgusting water results with that from a Ionic Detox Foot Bath, which also uses some kind of electrolysis. Foam is not mentioned at all on the chart above but white foam did appear on the SamDaSoo water. What does this signify? And do the two electrolysis tools have overlap in what the gross water appearance tells of the chemical make-up of what is in the water? Hmmm ...
Posted by Cheryl Magnant at 11:55 AM